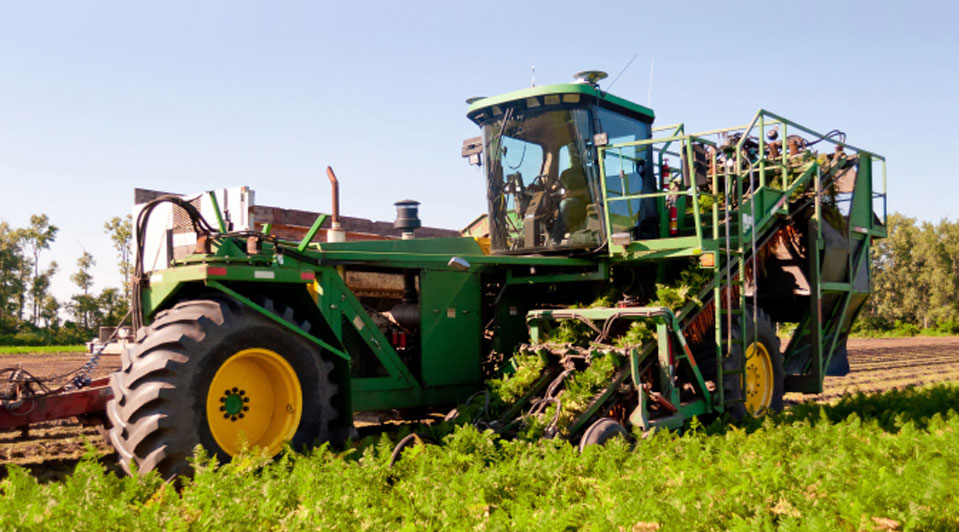 A carrot is a carrot, right? Not quite. As Americans celebrate their love affair with this vegetable’s starring role in sweets during National Carrot Cake Day on February third, there is nobody better than Jason Stallaert to tell us more about his company’s next-generation carrot cultivation.
~
Jason is President and head of packing operations of Nature’s Finest Produce based in Chatham-Kent, Ontario, and runs the company together with brother Kevin Stallaert, head of farming operations.

This star distributor knows pretty much everything about growing and packing the freshest, sweetest carrots in the land. Nature’s Finest Produce, together with its sister company Kejay Farms, is so dedicated to its customers throughout Canada, North America, and as far as Hawaii and the Caribbean Islands that these customers will soon have access to freshly harvested carrots every month of the year for the first time.

Driven by a desire to be the best carrot and onion grower in the industry, this trusted operation is favoured by some of the largest retailers for delivering quality produce at reasonable rates. Its harvests are grown and packaged according to the food safety through good manufacturing process protocols.

It also participates in a program promoting locally grown produce, to support Canadian farmers in delivering the freshest local products to local consumers. “For the sake of higher yields, many of the producers in Ontario don’t have control over the varieties they pack. Because it is what our clients want, we get to choose the sweetest cultivars, despite not being the highest-yielding ones – which others don’t get to do,” says Jason.

One of Nature’s Finest Produce’s main advantages is that southern Ontario happens to have a rather extended growing season compared to other Canadian agricultural regions. “We are able to harvest fresh carrots much longer than anywhere else in the country, so we’re able to offer customers locally grown produce for much longer than anybody else,” says Jason.

But it is not just the environmental factors that allow for such lengthy crop harvesting times. Its current cultivars give lengthy harvests, so the company only has to resort to cold storage produce during the winter months. Thanks to some visionary planning, its lack of winter crops will soon be a thing of the past. “We’re working on offering fresh local supply all year round by adding new varieties and employing advanced cultivation methods,” says Jason.

Closer inspection reveals that our favourite roast side vegetable has a long and proud history. The carrot is believed to have been originally prized for its foliage and seed, but today, there probably is not a country in the world that does not consider the root to be a healthy part of its diet. Tradesmen and adventurers carried the carrot across the globe starting in Asia Minor, Persia, and Hindu Kush, following the Silk Road to eventually arrive at every fresh market in the world.

According to the online World Carrot Museum, the first recorded history of carrots being consumed as food dates back over 1,100 years to Afghanistan. So, it stands to reason that some of the oldest recipes hail from the greater Persian region. Now, the humble carrot features in recipe books around the world with housewives, cooks, and chefs putting it to good use in a multitude of dishes.

While the carrots that were originally grown in the Middle East and Asia Minor were mainly purple or yellow, Daucus Carota of the Sativus variety is the plant that Westerners know as carrots. These vegetables the color of sunsets are high in the pigment carotene and are believed to have been first widely cultivated by the Dutch around the 16th and 17th centuries since orange is the official colour of the Dutch royal family. Today, they are grown the world over, finding their way into everything from breakfast smoothies and lunchboxes to supper.

The Stallaert brothers are passionate people who have contributed to agricultural improvements through test crops. They have applied for a patent for their method of overwintering wherein carrot crops are covered with a waterproof barrier and around sixteen inches of straw in the fall to protect the mature taproots from the approaching harsh winter conditions.

This process allows carrots to stay underground for an extended period of twelve weeks during winter only to be harvested in March, April, and May of the following year. The method produces a carrot that is believed to be up to three times sweeter than any other. Not only does the company ensure that its consumers have the tastiest Canadian carrots on their tables all year round, but it also prevents costly and often wasteful food imports from much further afield.

Even though Kejay Farms have expanded its carrot operation from forty acres to 1,600 acres, production is not all about carrots. Kejay Farms also cultivates four hundred acres of onions, supplying markets with yellow, red, and Spanish onions.

The farm started in 1994, growing tomatoes for processing outfits. After entering carrot farming in 1999, the brothers, Jason and Kevin, established the packing, distribution and marketing arm, Nature’s Finest Produce, in 2009. By this time, the frustration of having no other packer available in the area and having to wash and pack their own produce became too large an undertaking, and they opted to set up their own. Today, its 65,000-square-foot packing and distribution facility in Pain Court, Ontario is its pride and joy. With a healthy twenty percent annual growth, the successful duo has not looked back since.

According to Jason, none of this success would be possible without the company’s incredible employees, so it takes great care to ensure a happy and caring working environment for its people. Its workers’ skills are regularly updated through training.

“We have very good people in all areas – both at the packing facility and at the farm. It is a tough business, and in order for us to succeed, we need people with a passion for what they are doing,” says Jason. This hands-on owner prides himself on always being available to clients.

This combination of service, quality, and stewardship has landed Nature’s Finest Produce with a number of awards. One of these was the 2009 Regional Premier’s Award for Agri-Food Innovation Excellence for its overwintering methods. The project also won the company the Chatham-Kent Chamber of Commerce ‘Agriculture Innovator of the Year.’ Inspired by its successes, the company is implementing automation in a bid to remain cost competitive while maintaining quality.

Its carrot crop yields range from 40,000 pounds per acre up to 120,000 pounds per acre per year, depending on the time of year and the variety, so there is more than enough to go round, both for customers and for those in need. This company donates generously to food banks and other organizations in need.

If twenty-five years in business has taught Jason Stallaert anything, it is that one should focus on what you can do better than anybody else and go for it with all you have. With a steadily increasing demand for locally-farmed food, 2019 already holds much promise for Nature’s Finest Produce. Rather than buying produce from unknown sources, its customers like to know their producer personally. As part of this push for homegrown goodness, the two brothers are exploring new commodities for the company’s ever-growing markets.

When asked for his favourite recipe, Jason confirms, “Apart from ranch-style carrots, they really are great just the way they are,” he says with a smile. And we concur.